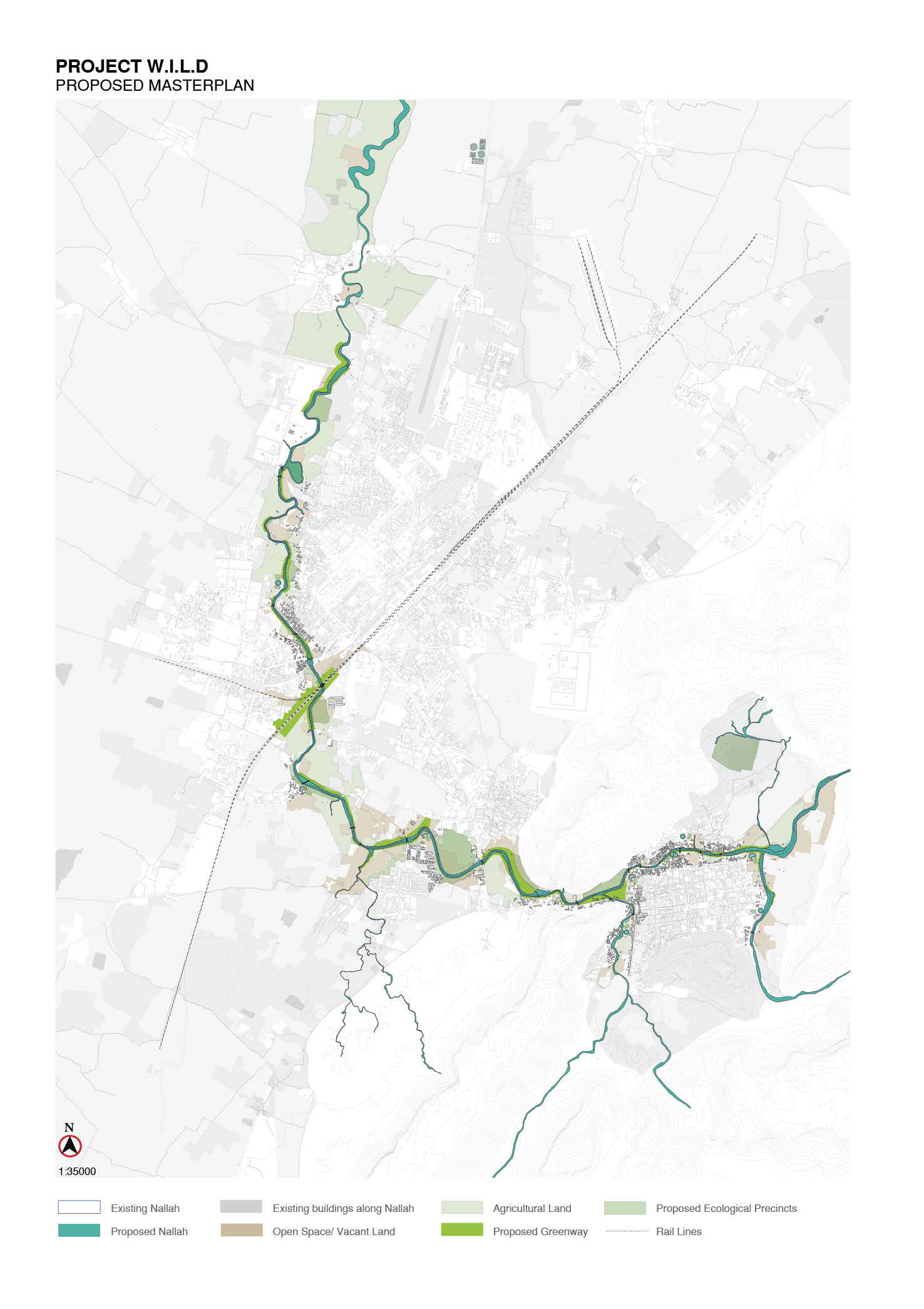 Jana Urban Space prepared and submitted the masterplan for Sawai Madhopur -2035 in 2015, and it was subsequently notified in 2017. Three plan projects were identified as part of the masterplan to transform the quality of life for its citizens and convert it to a “pull city” from a “push city”. Project WILD – the restoration and rejuvenation of 12 KM of Lutiya Nallah as an important water body, green mobility corridor and public space was one of the plan projects.
The Lutiya Nallah begins at the Vindhya and Aravalli Range and flows north joining the Banas River eventually. It runs across several towns, industrial zones, open and agricultural lands, creating varied conditions throughout the 12.25 km stretch; Sawai Madhopur Old Town and Man Town are the largest settlements along that stretch.
Like most water bodies in India the Lutiya Nallah played a critical role in the siting and development of Sawai Madhopur Old Town and was once an important source of water. However, over the years the nallah has been plagued by the problems of urban growth, transformation and negligence. Today, the nallah is no more than a mere drain, carrying sewage and garbage from every street.
The proposal aims to redevelop the 12.5KM stretch of Lutiya Nallah from the Old City to beyond Man Town through a threefold strategy of conservation, preservation and rejuvenation. The project aims to restore and protect the nallah, and create a greenway with a hierarchy of public spaces to be enjoyed by visitors and residents.
The proposal aims to work at both macro and micro scales, to revitalize and upgrade the ecological, recreational and social value of the Lutiya Nallah. At the macro scale, the focus is on both the drainage basin and the city’s sewage system. Firstly, the sewage is prevented from flowing into the nallah, and then the existing streams, ponds and low-lying land are all integrated into the ecological purification system along the nallah. This method helps in water recharging. Secondly, the creation of natural edge conditions to revitalize the riparian ecology and maximize its purification capacity. Lastly, the creation of continuous pedestrian and bicycle paths to help integrate the urban recreational and ecological space increasing the accessibility of the nallah front.
As part of the rejuvenation strategy, 6 sites have been identified along the nallah for development of as public spaces of great value to the town, which will not only attract tourists and residents alike, but create civic pride and lend a memorable identity to the currently nondescript town.
The proposed designs are supported with a strong revenue model allowing them to be developed as PPP projects with a focus on financial sustainability which allows for capital and operational cost recovery as well as revenue generation. 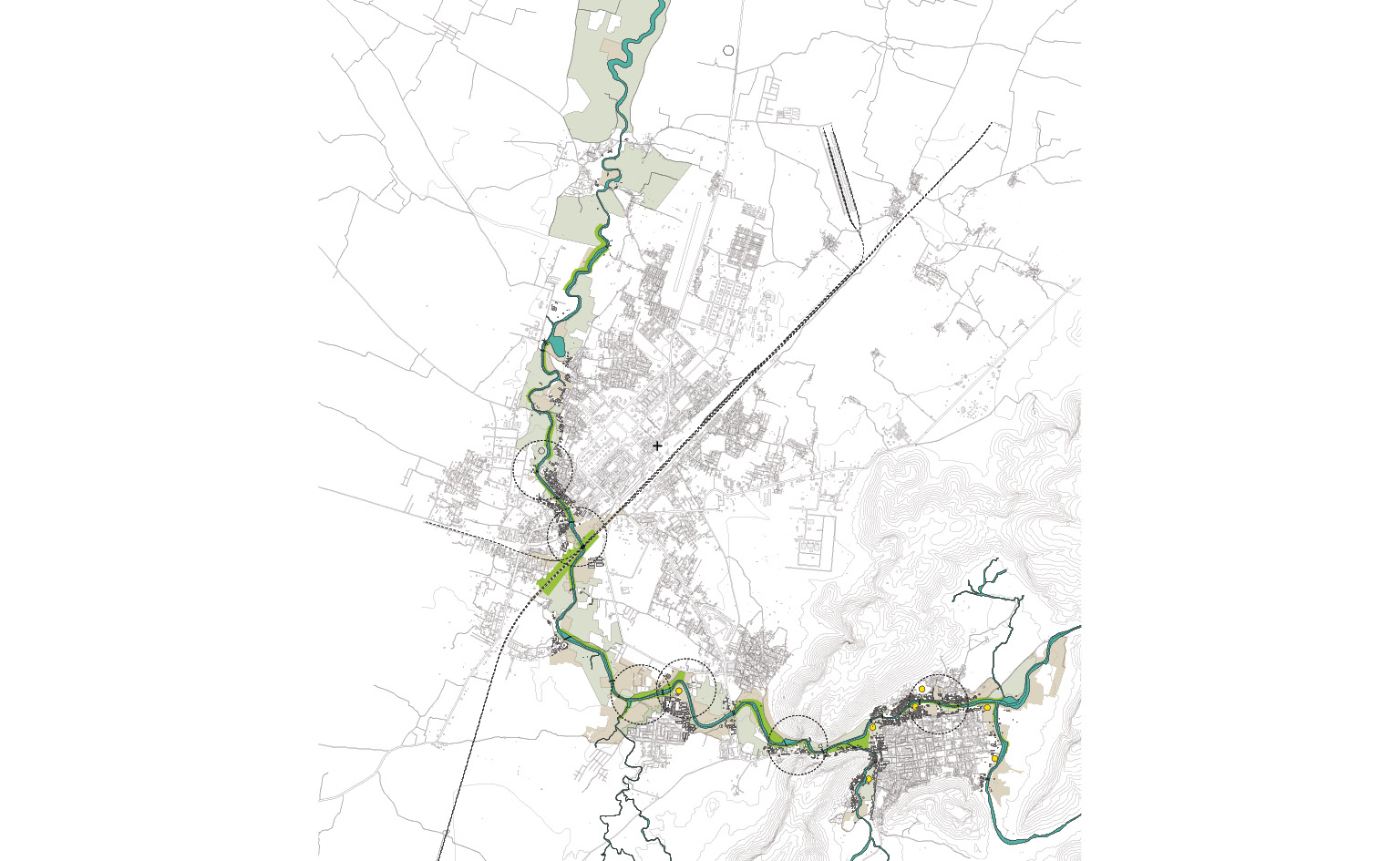 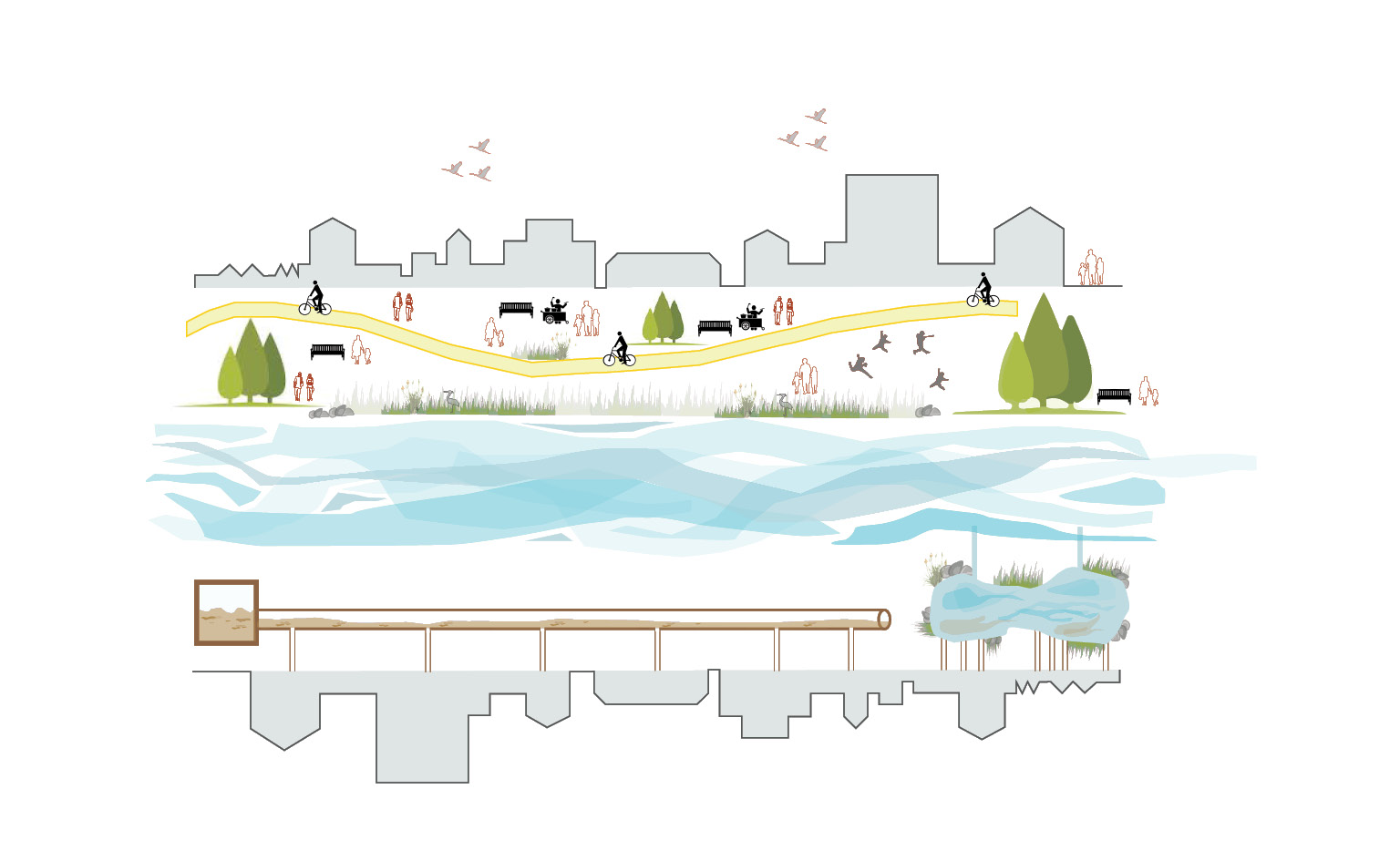 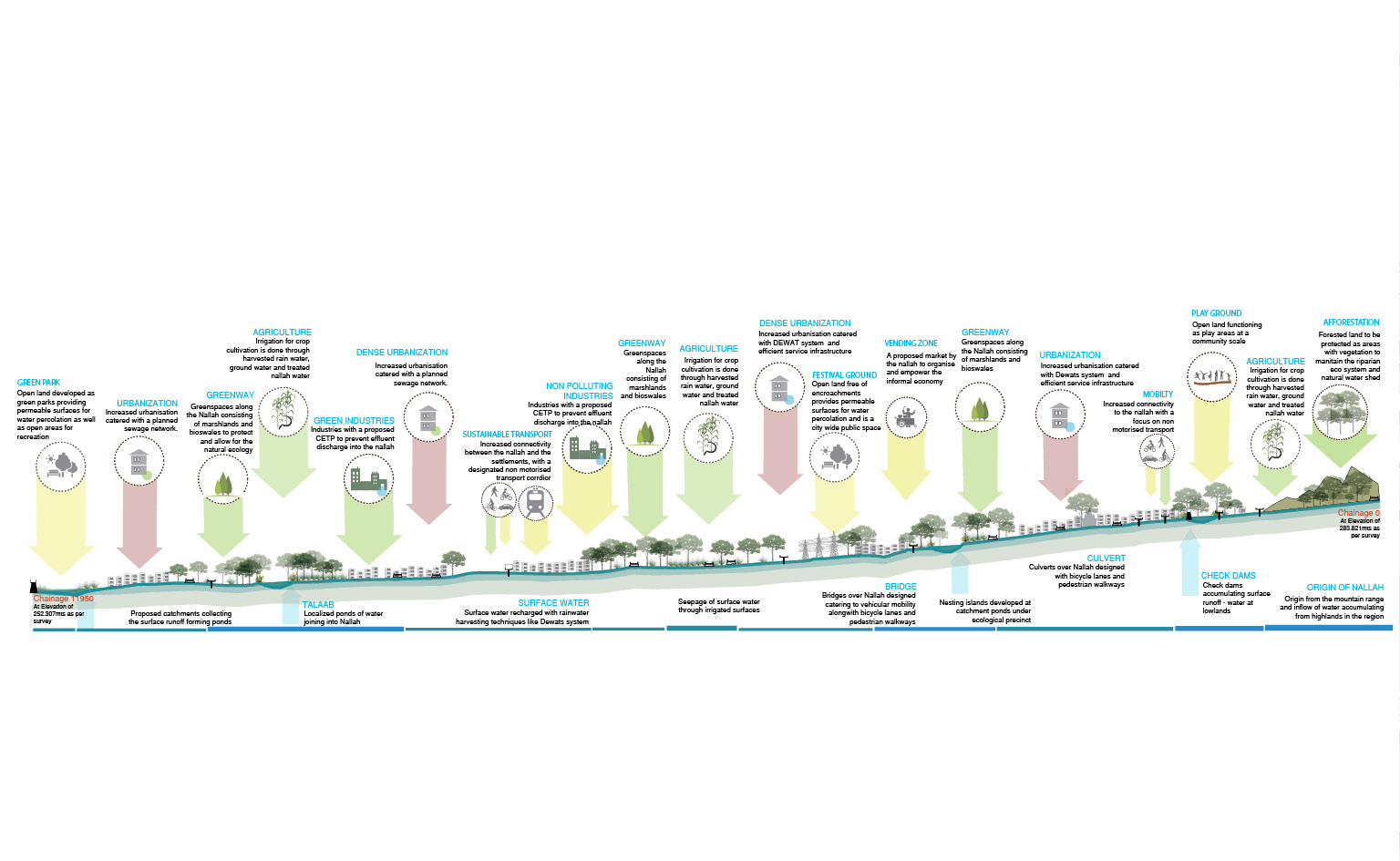 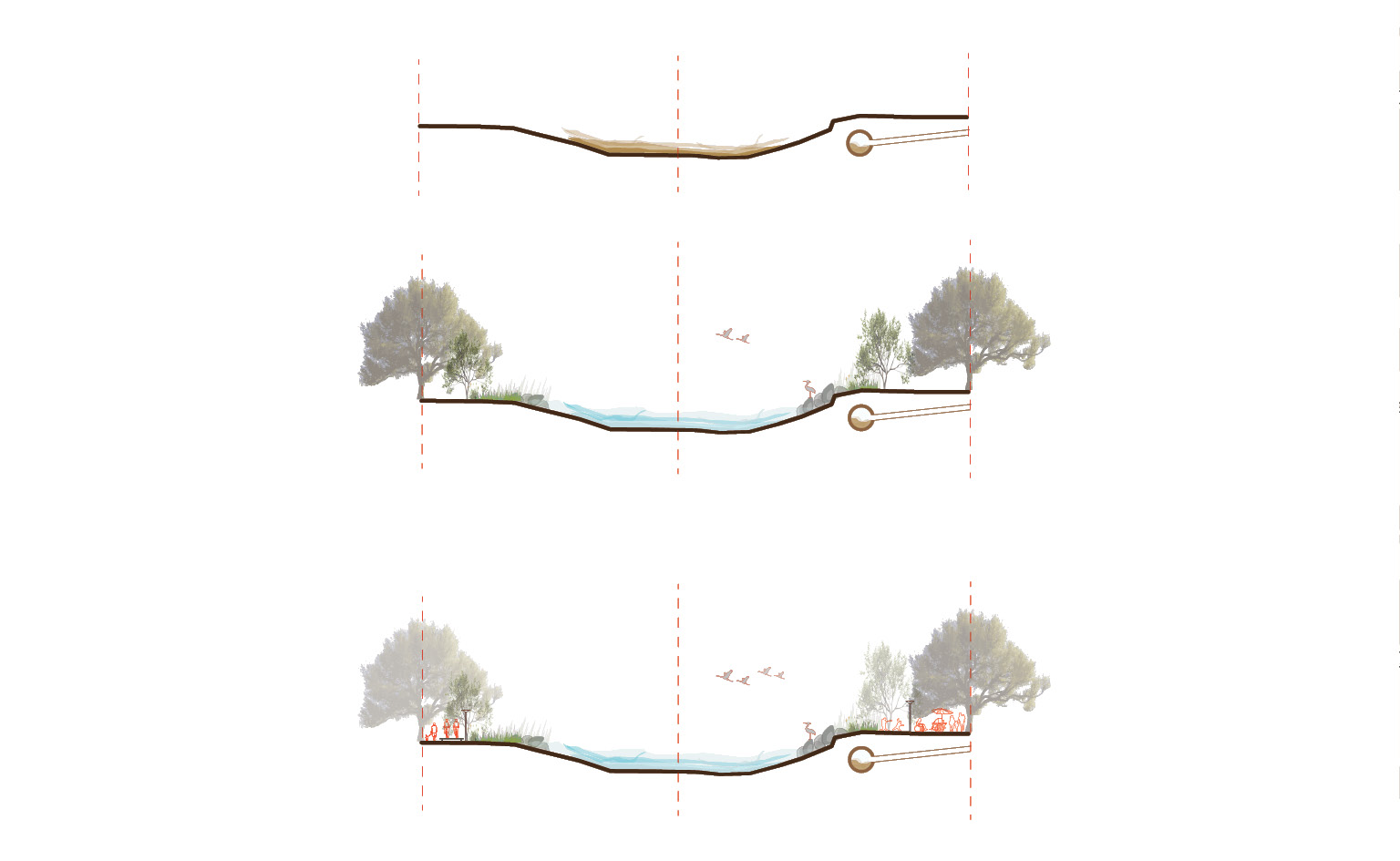 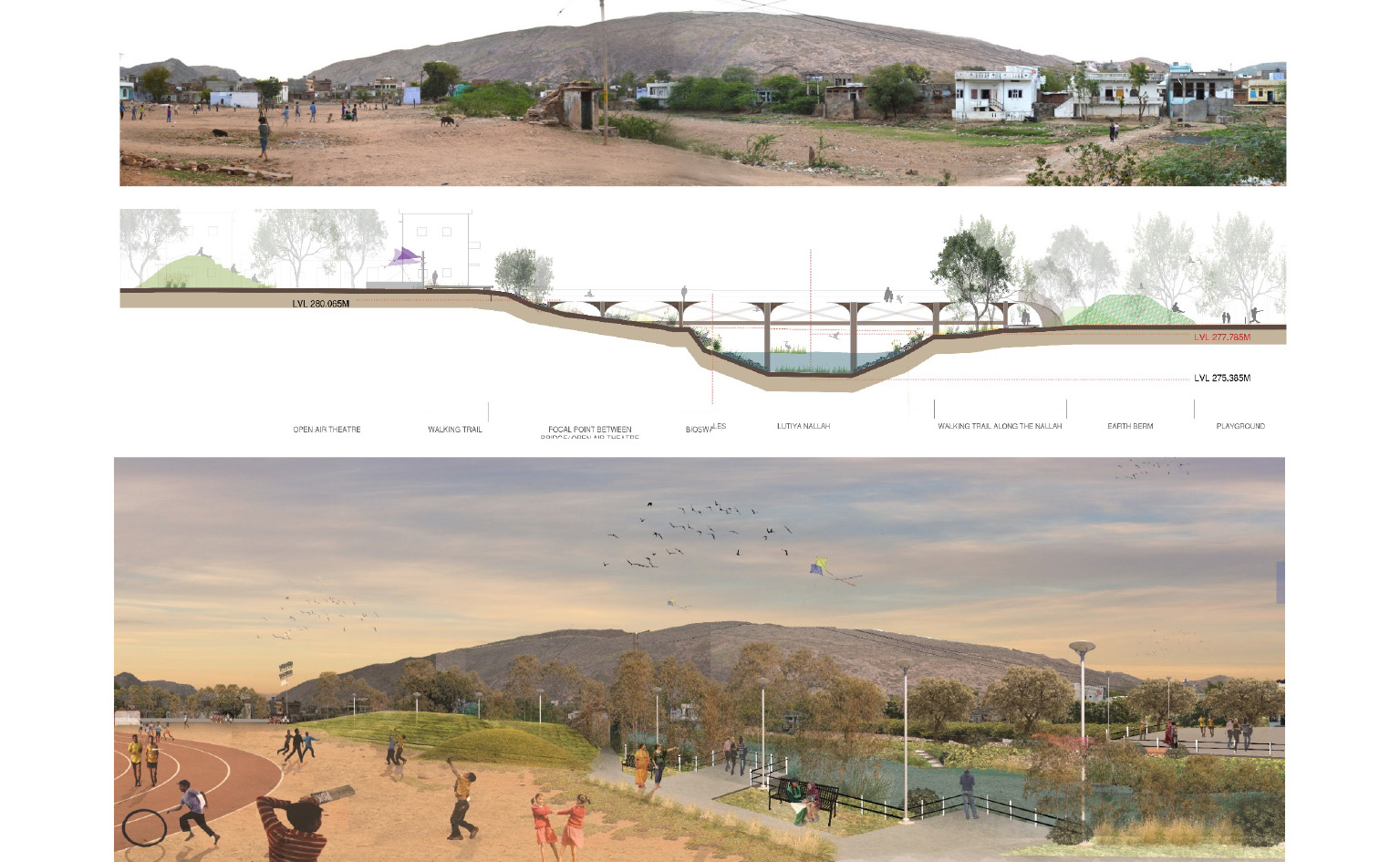 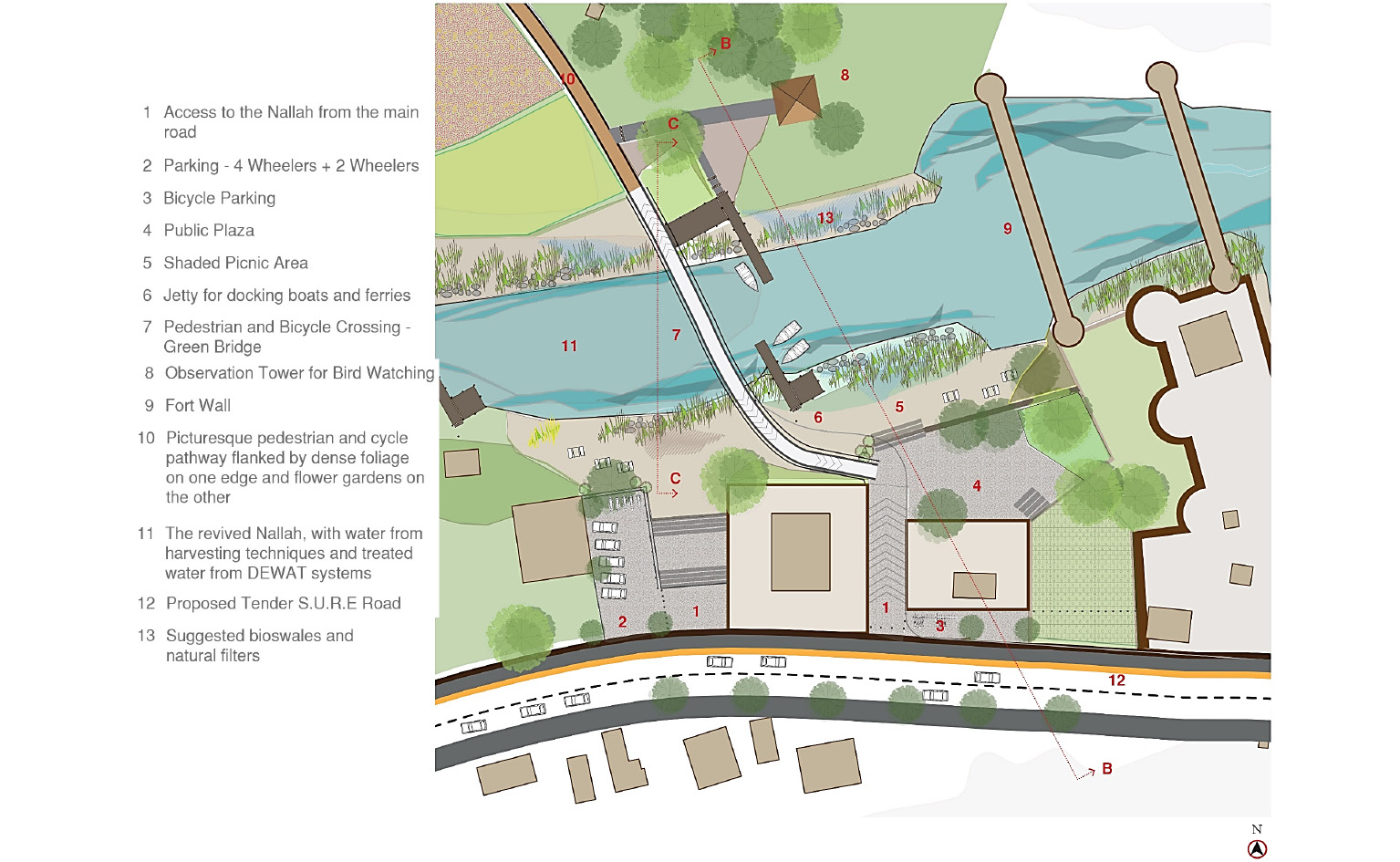 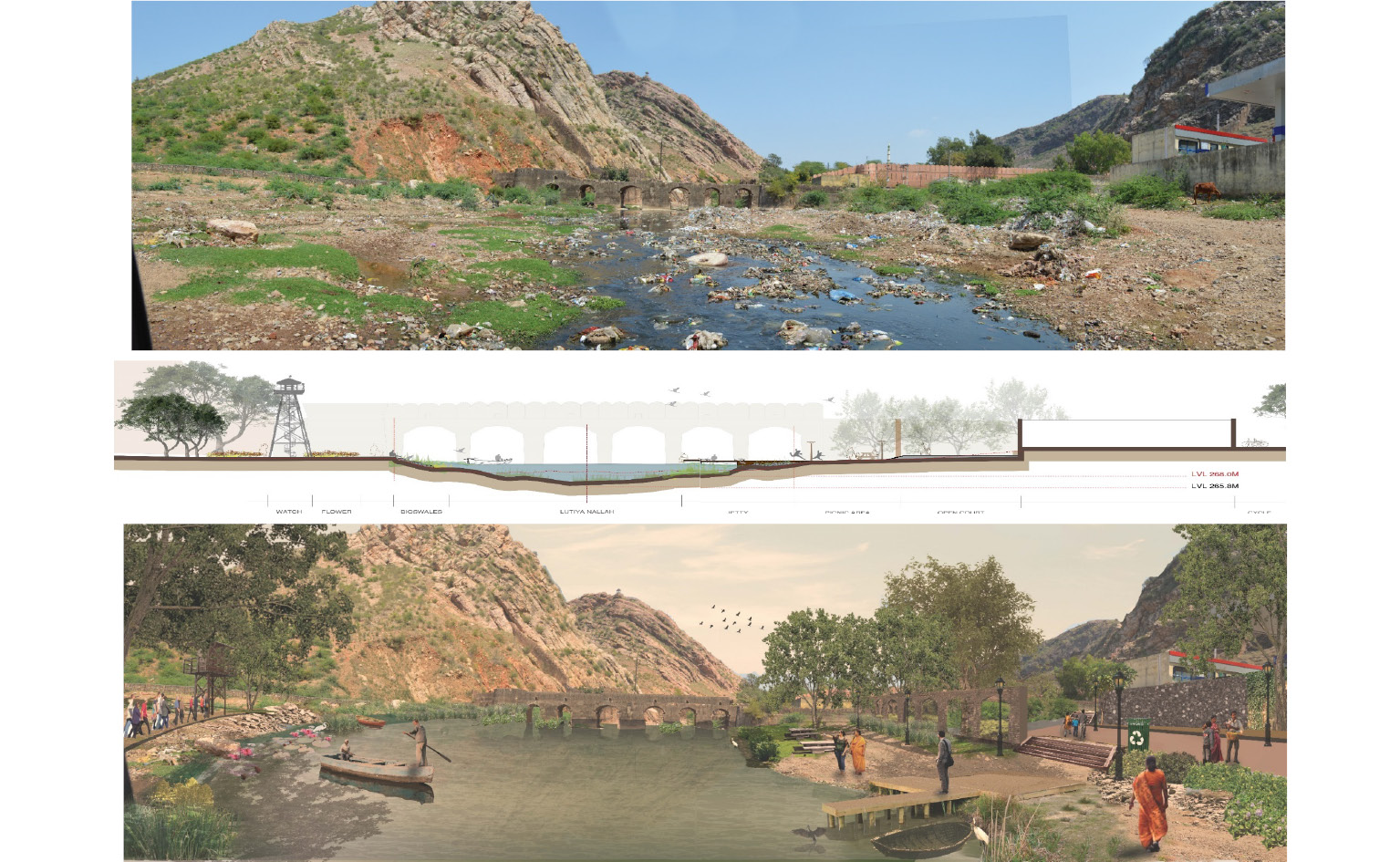 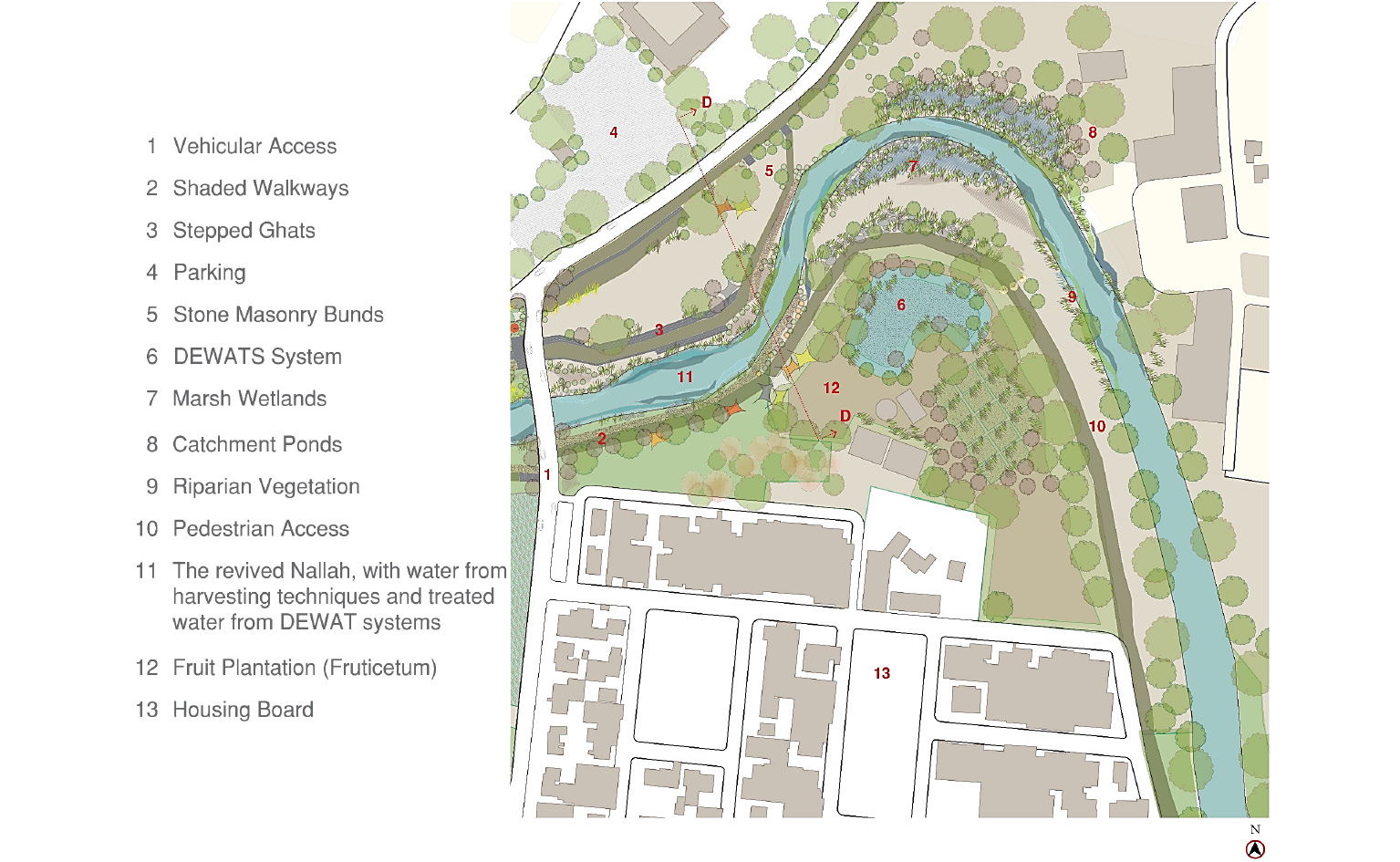 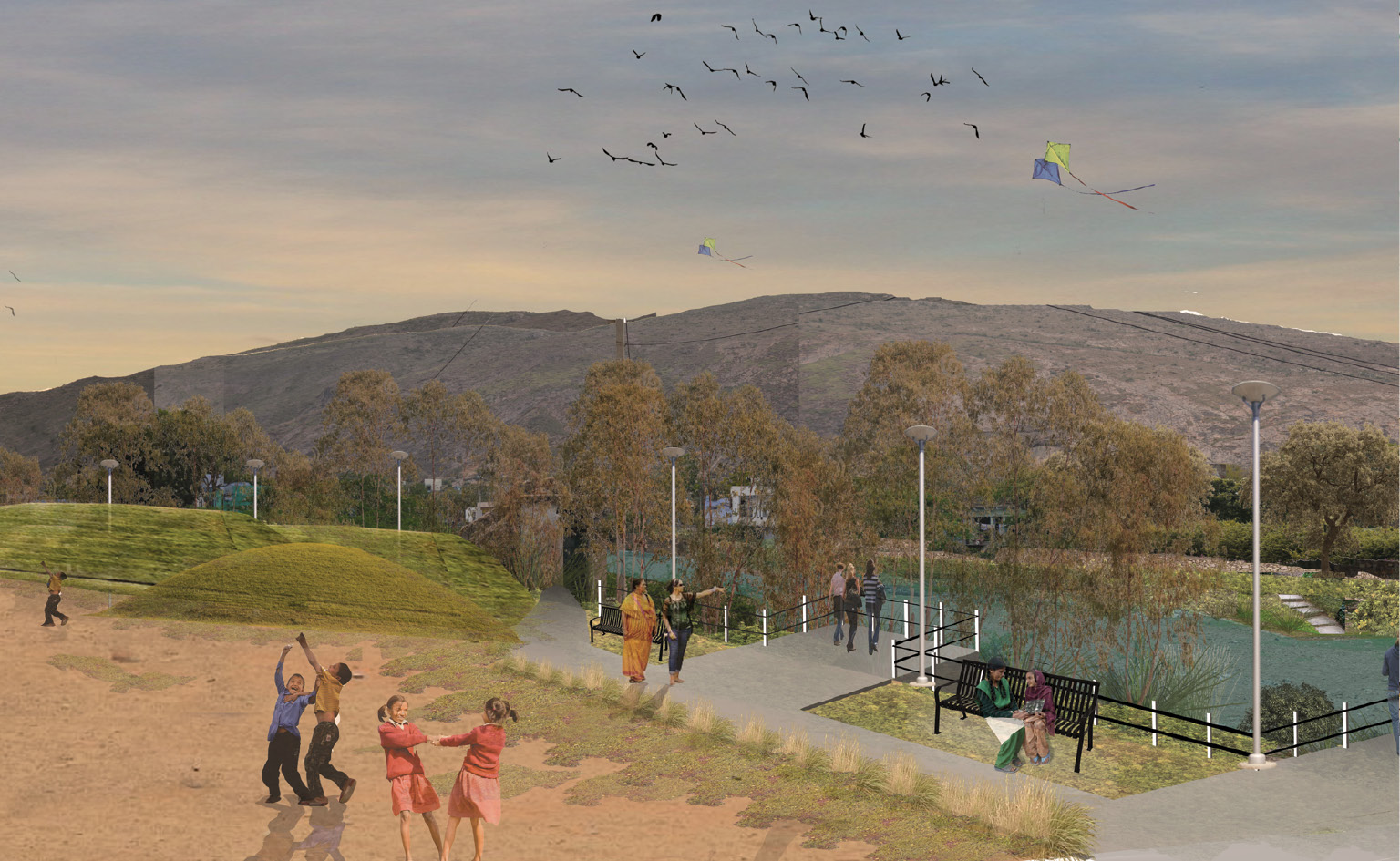 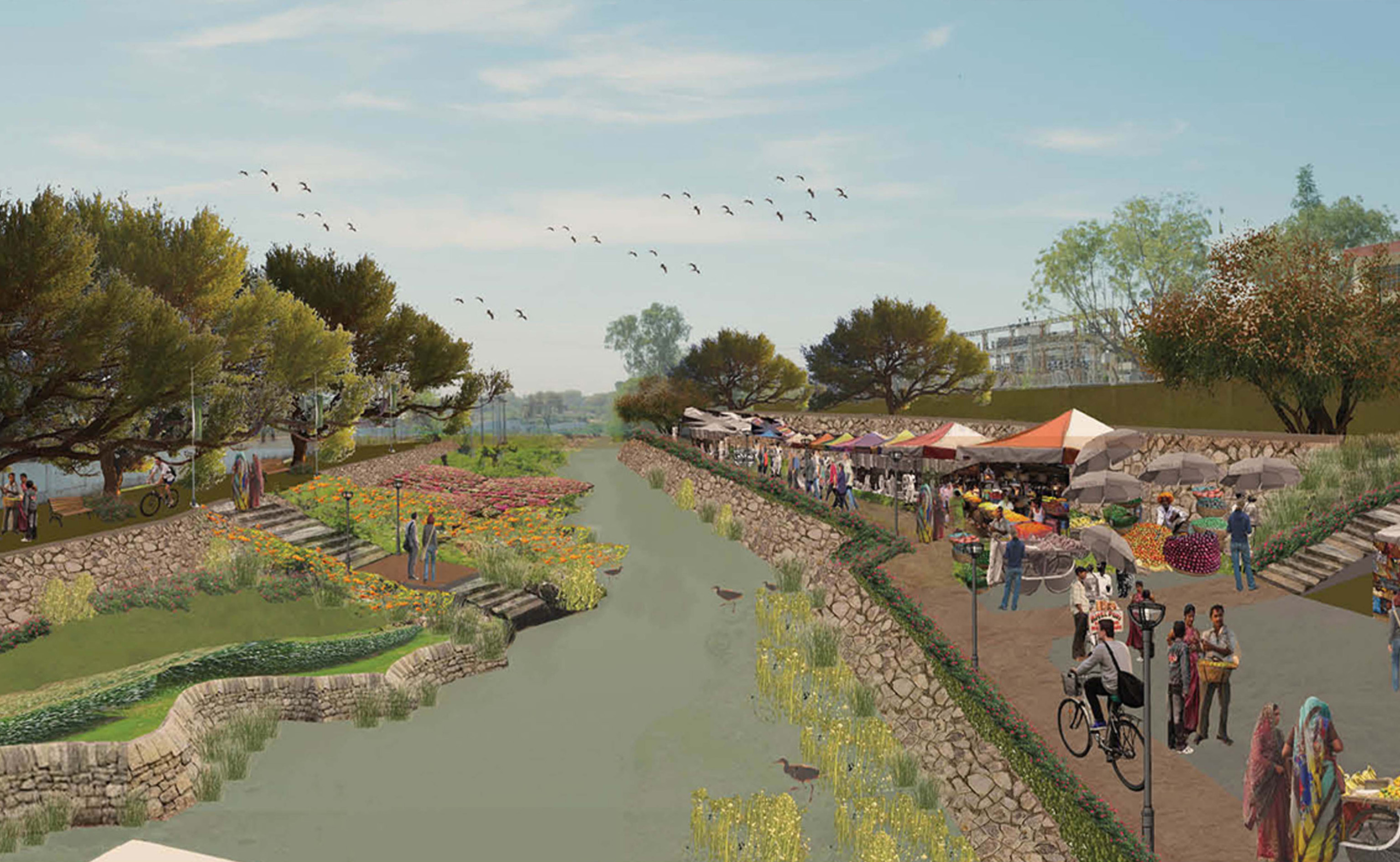